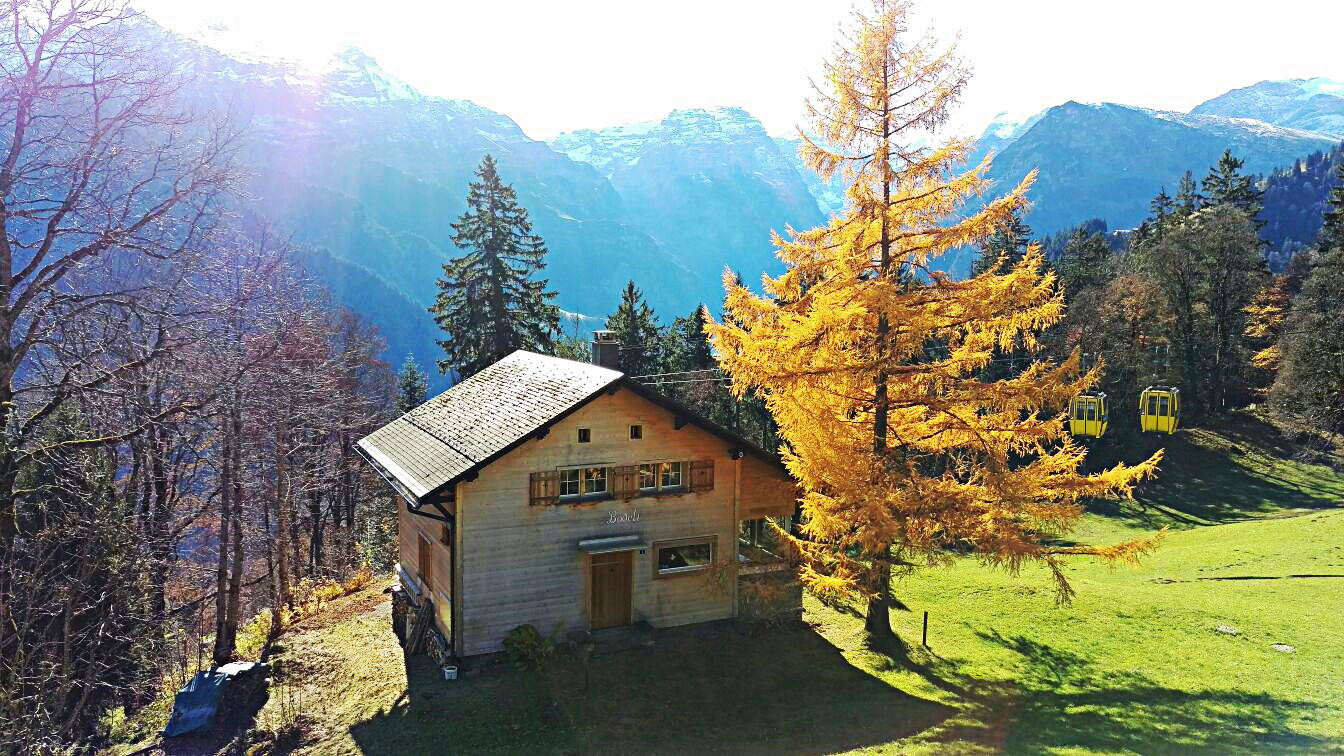 Jamagiaberg turned over the years into a village which can self-sustain its electricity consumption and produces enough power to provide it to companies which moved there to make use of the eco-friendly electricity production. The habitants of the village agreed to let the canton install solar panels on their roofs, windows, barns and so on to gain the biggest possible surface for the production.

It has been over 30 years ago that Ruedi started the project “Grison Power Village” and made the canton of Grison using the numerous free spaces in the village to produce electricity: The roofs and walls of the mountain houses! Now, that his whole vision has been realized, he walks through his home village which turned from a dull mountain village without big perspectives into the pioneer village of photovoltaics in the Swiss Alps. Seeing all the positive changes he remembers the way how they got here and how everything turned out just fine:

“How lucky we were that Jamagiaberg’s residents always have been so nature conscious! Otherwise they probably would not have decided to contribute a part to social wellbeing. But together, after quite an amount of work convincing them they stepped towards a better future and were ready for a change. Looking back now we all know that the electricity consumption has been rising in the past. So by now it is obvious that the change was needed, back then it was not so clear for everyone. Also the initiative those years ago which banned nuclear power plants from the country, made a rethinking necessary as we needed to fill the shortage. How well it all played together and made people understanding the importance of renewable energy production. I clearly remember the first person who agreed to provide his roof to the canton of Grisons. Gian, the local baker has always been willing to improve life quality, especially in Jamagiaberg. So thanks to him and all the others which followed, the canton could launch the project of producing electricity with renewable energy sources and used the numerous roofs and walls. The step to photovoltaic window glasses was just a small one as it would not even change the way the houses look like. But still, it is possible to generate even more power! 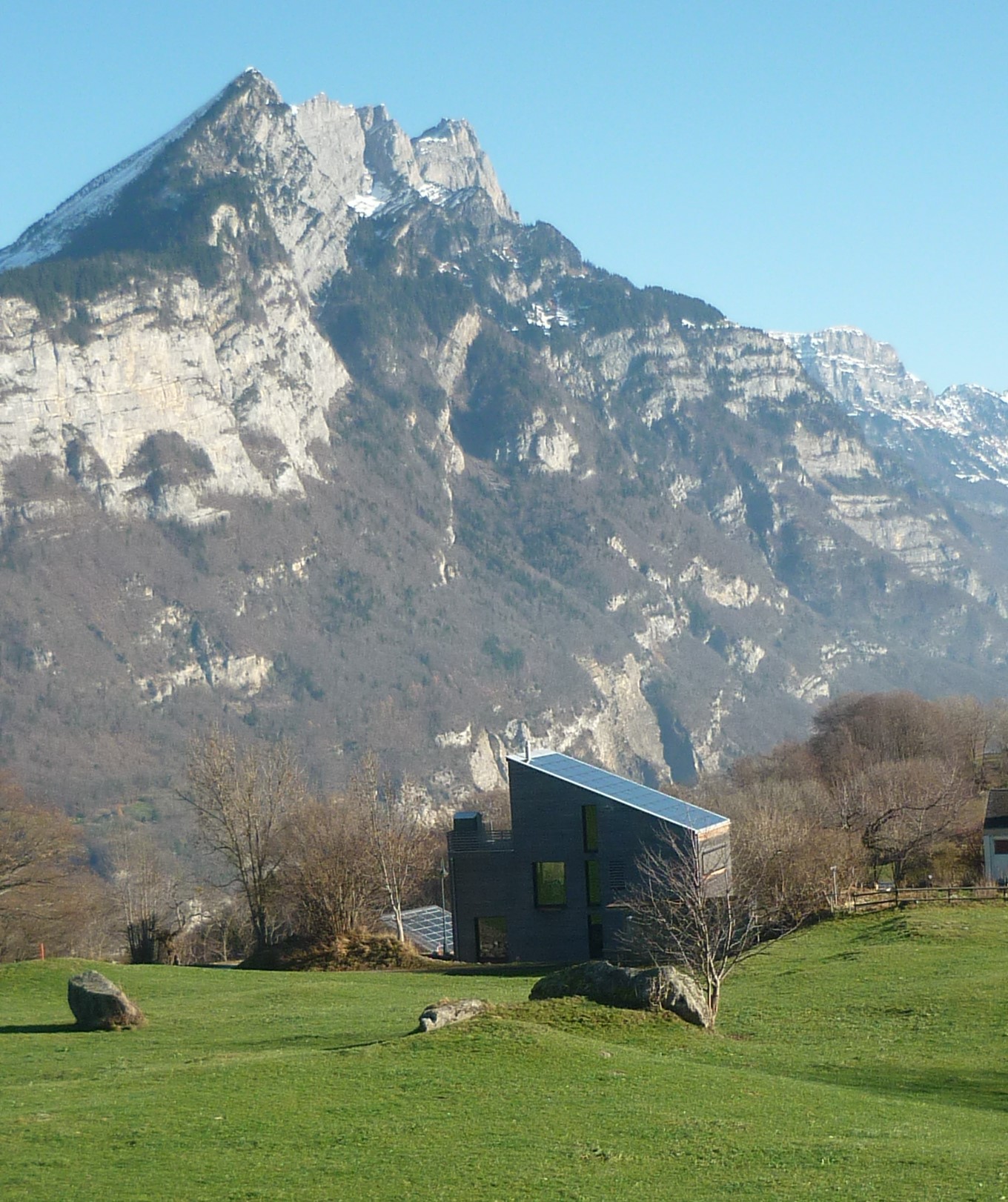 Amazing what technology was able to do in this field. Having all these highly efficient panels and even the invisible windows. Back then, no one could imagine that this could actually work out. Now, the technological progress has been enabling a higher production than it had been possible ever before”.
He passes by the numerous environmental friendly and sustainable companies and hotels which saw the benefit from the green power in Jamagiaberg. By now he really enjoys shopping the cloths from them. They decided to move their production into the mountains as now they can produce their products even more genuine – Not only with for example PET waste but also with good electricity! How was that possible? Well, basically what happened, the village became not only able to self-sustain its electricity consumption thanks to the panels, they can even produce a big spare share which can be used by others outside of the village and factories. Ruedi walks by a few tourists and greets them happily. “I never thought that even tourists would come and want to see this place with its sustainable power production. But I think the inner need of many people to decrease their carbon footprint, and of course the amazing view of Jamagiaberg let it become a really interesting destination.” With the sun in his face he thinks: “This was the perfect place to start this project. We have so much sun and so little fog here, it is just perfect to show everyone how good it works out. However, the new solar panels do not even need direct light but the diffuse one which is findable in many other places is fine as well. It makes me really happy to see that other villages around here and also in other cantons follow. This was a full success!”

The foundation for the success for this project, was laid in the year 2015 when Ruedi had the idea of the Solar village 2050. As a saying goes, nothing remains constant except change itself. And being faced with so many problems and future concerns, on a sunny Thursday morning Ruedi says to himself: “There is a need for change, if it is wanted or not”. To relax he sits down, and starts to read the newspaper. After reading a couple of articles he stops at one about the financial situation. It says that the economic downturn in recent years affects businesses and customers alike. The need to cut costs to maintain profitable is always present. “But, wait a moment!” and with this turns back to another article about global warming and climate change and the need to invest in a more sustainable future. “This is definitely a conflict, cutting costs and investing at the same time?” and in this moment, a ray of sunlight shines through the window and blinds Ruedi for a moment. “Well, at least I can always count on the sun!”

With the idea born and Ruedi motivated to start the change to a more sustainable future he begins his research about solar power (photovoltaic). 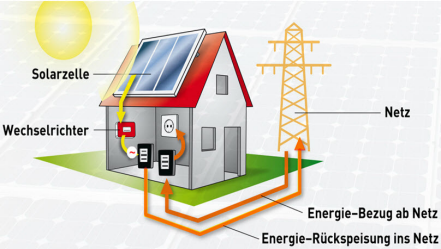 Nowadays, nuclear energy is considered as one of the most environmentally friendly energy source. This due to production of fewer greenhouse gas emissions during the production of electricity as compared to traditional sources like coal power plants. While being environmentally friendly is being used as a defence of nuclear energy, the disposal of radioactive waste and protecting people and environment from its radiations cannot be overlooked. Therefore the Federal Council’s focusses with the Energy Strategy 2050 on a new strategy including the exploitation of renewable energy sources such as solar power. “Very interesting”, Ruedi thinks, “I’m sure that if the authorities plan these changes in the future, they will support investments in solar power”, and with this he finds out that indeed they do. With all this information he wants to  know how profitable it would be and finds the Solar Report:

After a long afternoon of research he asks himself: “We have the technology, it is financially profitable, the authorities support it, it is a good idea for our society and I’m sure there will be a lot of support from others, but still…!” and while he is lost in thoughts about his vision, Jürg the local electrician walks in. Ruedi tells him about his idea and asks him a couple of questions:

Ruedi, now fully convinced about his idea shouts: “So, what do I need to do to successfully implement my vision!”

So he starts immediately with the planning and implementing the next day. He remembers that he found a helpful website during his research yesterday: www.swissolar.ch. There he finds helpful information about the criterias, which have to be fulfilled to create solar powered village. To bring all these information together he creates a check list: 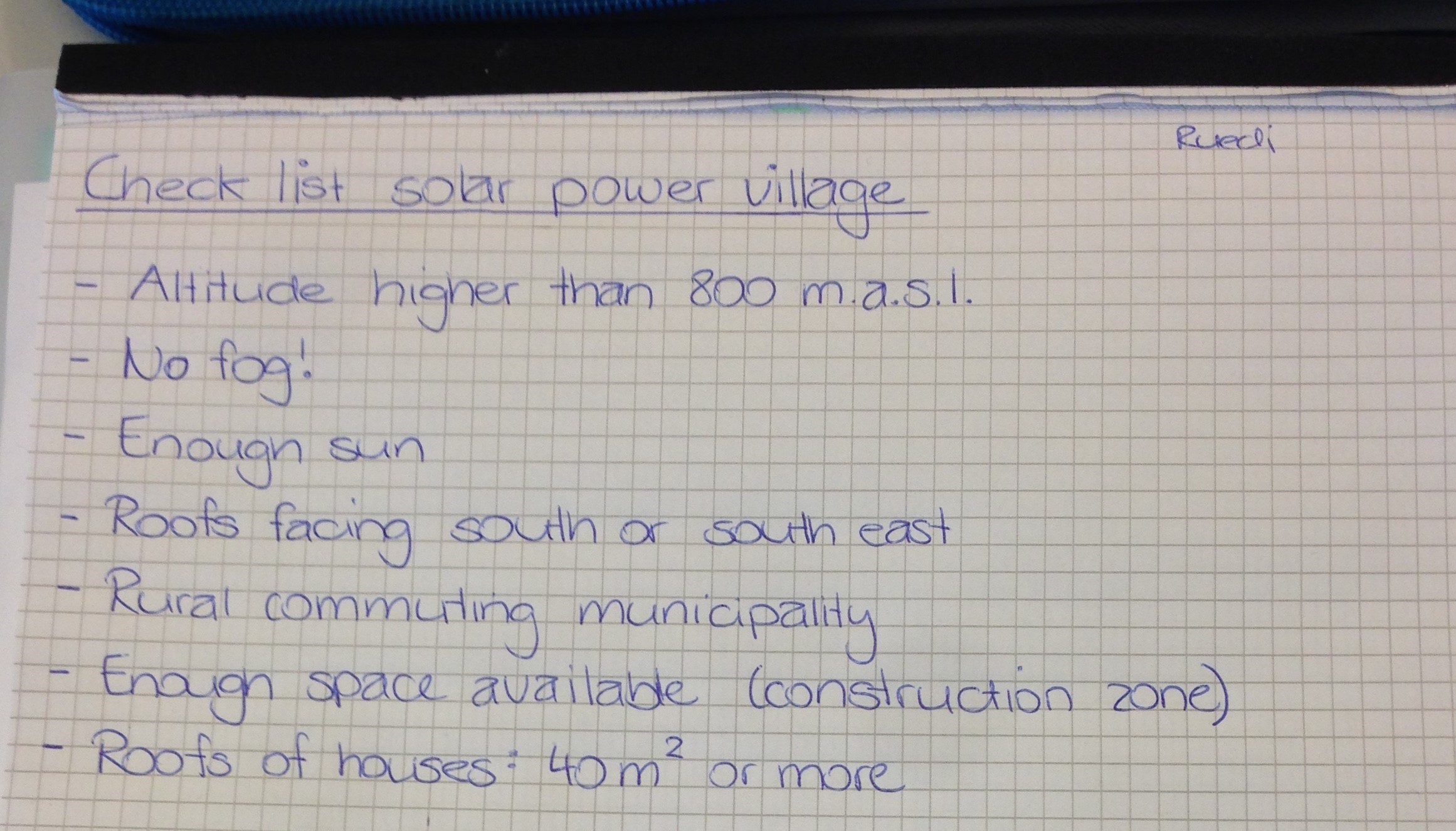 After going through his notes again, Ruedi realises that he does not need to look for the perfect location any longer. He already lives in the perfect village to implement his vision. His hometown, Jamagiaberg lies in the Engadin in the canton of Grisons. The pretty little village lies on 1’078 meters above sea level and faces southwards. 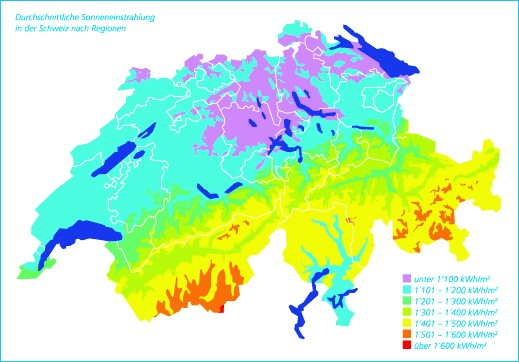 As shown on the pictures, its location gets enough sunlight throughout the year, which makes it the best possible location for a solar powered village.

„How do I proceed now?“, Ruedi asks himself next. „Ah yes, I have to talk to the people who live here in Jamagiaberg, especially to Fritz and Sepp. I can imagine that these two would prefer that everything stays at it is here in Jamagiaberg: no change, no development. Ruedi thinks that every single inhabitant of Jamagiaberg needs to be involved in the process to make the solar power village happen.
He calls the municipality: Good morning Andrea, I have a question. 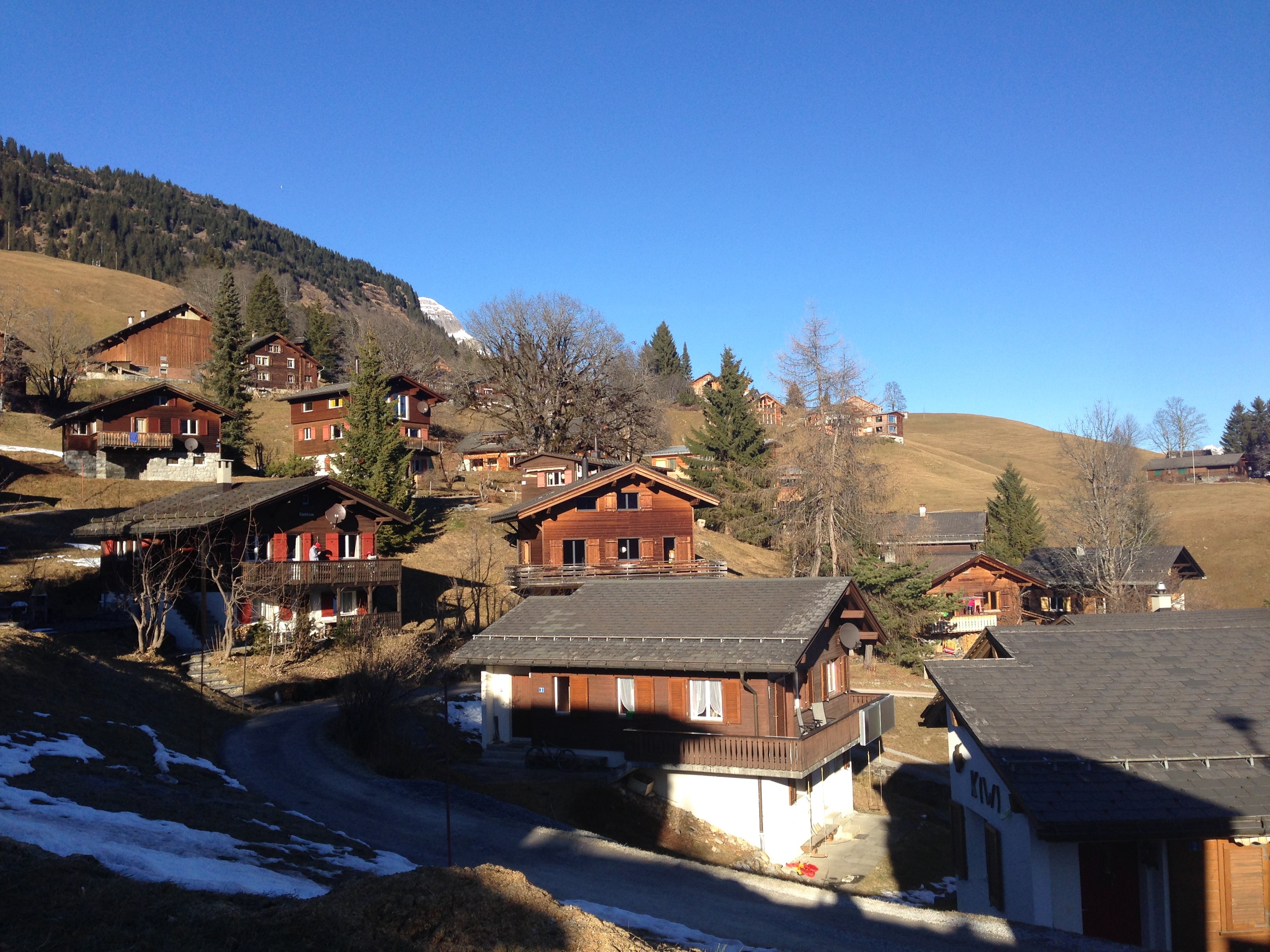 Can I rent the gym for a day to make an info event about the solar power village, we want to build here? You know, I would like to invite the people that they can see by themselves how much they would contribute to a better environment here in Jamagiaberg, how much it would cost for them and that they just can ask their questions and so on. Is that possible? Yes? Oh thank you Andrea, that’s great!“
Ruedi has a big smile on his face. “How great is that?”, he thinks. “I am sure that we can start soon after the information day. Thinking about starting the project: who would place the panels on the buildings??”

At last, Ruedi does some research on the internet again to find building companies, that could carry out the work. He decides that he only wants the best company to do the work and therefore, he will publish the work cantonally and every company can apply. In the end, the company with the best cost-performance-ratio will get the job. “Yes, that’s how we’ll do it!” Ruedi is happy, he realises that his project becomes reality.